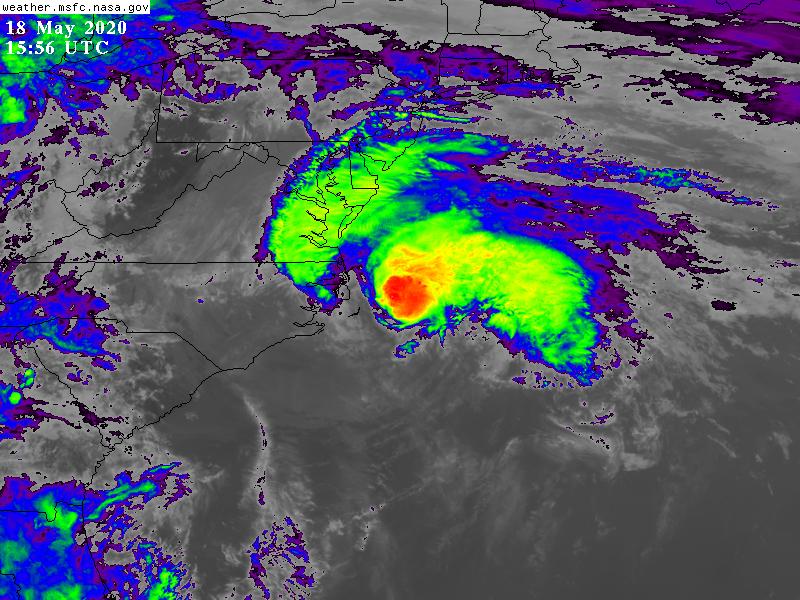 It’s a good time to be a surfer in Florida! Normally our Atlantic Ocean hurricane season starts June 1st, but we can wait a few months after that into August often times before we see a decent hurricane swell. Not in 2020!

After beaches were closed in April due to the Coronavius pandemic, I think we are all ready to get a little much needed Vitamin Sea to boost our immune systems and wash off the negative energy just in time for summer. Queue Tropical Storm Arthur!! The weather models have been hinting at a tropical system to develop since early last week, and on Friday our first tropical depression formed just off the coast of SE Florida. The initial swell phase was muted due to proximity to land, some blocking from the Bahamas and a short duration over water as Arthur moved at 10 mph towards Cape Hatteras. However, some areas of central Florida had clean conditions Sunday AM with a 5′ medium-period swell filtering in.

Looking at the Visible Satellite Loop of Arthur this morning, you can see the center of the storm pushing just east of Hatteras and staying over the open Atlantic Ocean. The storm appears to be strengthening slightly , and will have a favorable environment over the warm waters of the Gulf Stream for the next few days.

The Euro weather model has done the best job of forecasting tropical systems past few years, and you can see here a healthy fetch of 30-40 knot winds pointed directly towards the east coast of Florida as Arthur drifts east in between Cape Hatteras and Bermuda thru Thursday. The storm will likely weaken over the slightly cooler waters as it moves east of the Gulf Stream on Thursday.

The Wavewatch III swell animation above shows the evolution of the swell from Tropical Storm Arthur peaking at around 24′ @ 12 seconds from the NE late Tuesday into Wednesday. Swell groups travel at 1.5 times the period, so it will take around 42 hours for the swell from Arthur to make it 750 miles from the storm to here. Expect longer-period 15 second forerunners to show up late Wednesday evening into Thursday AM. The main brunt of the swell will peak overnight Thursday into Friday AM with favorable offshore wind conditions looking likely for much of the east coast of Florida.

So how big will it be? In order for swell production to be maximized, wind from a storm needs high enough wind speed, long fetch over the ocean and a long duration. This storm appears to be poised to check all of those boxes, so it is theoretically possible for the wave heights to reach the modeled prediction of 24′ over open ocean. Assuming a travel time of 800 miles, 25′ seas decay to around 8′ of deep water swell. At this time I’m expecting around 5′ @ 12 seconds north Florida and 7′ @ 13 seconds on the inside Canaveral buoy, which will translate to some well overhead sets at magnets in central Florida Friday AM. Plan accordingly…

Carver Skateboards Back in Stock!
March 2, 2021

The Unexpected Benefits of Surfing
March 1, 2021