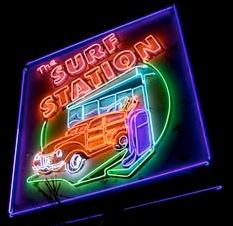 The Surf Station has its roots deep in the St. Augustine surf culture. I grew up surfing at the St. Augustine pier in the early 70s. As the longboard era was coming to an end, throughout the 70s from the pier days to Vilano’s bowly prime to the original blowhole, I was a surf rat who hitch-hiked from beach to beach. My biggest problems in life were whether to eat the special at O’steen’s or Shiver’s for lunch, and what time to leave to catch Vilano at high tide. The love of surfing has always kept me going and after high school the thought of a real job never entered my mind. My father was killed when I was a teenager, so I knew I had to do something on my own, but what???

I bused tables and bell hopped but that wasn’t for me. I knew deep down that my life would evolve around surfing. When windsurfing took off in the late 70s, I had a blast with the sport. I was teaching windsurfing in Salt Run in the state park, working my way through college, when a doctor friend who was heavy into the sport suggested I open a windsurfing shop. There were none at the time so I decided to combine that with my first love surfing and open up a shop. The problem was…no money. In school they taught me location, location, location, so I decided if I couldn’t get a great location I wasn’t going to open at all. After searching all over St. Augustine for the right location, it hit me as I was driving into the state park one day — “The gas station on the corner! – That’s it!!!” I was so stoked to have found the location of my future shop. But how could I put a shop there? It was an Amoco gas station. Would they sell it to me? And if so, how would I pay for it?

Through a realtor friend, I found out who owned it. It was an oil company in Jacksonville I wrote up a contract and sent it to them making an offer of well over $100,000.00. I thought they wouldn’t even respond, as the property wasn’t listed and the gas station seemed to be successful. To my surprise, I got a return letter with a counter offer. The place was for sale!! Now to solve the last problem, the money. I went back to my doctor friend, Dr. Steve Lee in Jax, asking him if he would be interested in helping me to open that windsurf shop he had suggested. He was a young doctor, so he hadn’t acquired a lot of debt yet and he said he’d look into it. He bought the gas station and rented me the bays on the side. Thus, The Surf Station was born in June of 1984.

We started by carrying Fox surfboards, Sundeck baggies, and Windsurfer sailboards. A few years passed by and Dr. Lee got more into his medical practice in Jacksonville and wanted to sell the property. What would I do now? Whoever buys it might raise my rent or even kick me out. “Stop thinking so small,” my best friend Alec Maitland told me. “Buy the place!” he said. Alec you see, was a dreamer. He never took no for an answer. “You can do anything you want to” was his theme. And Alec did. He imported eels from Africa. He would fly to Italy, buy gold, bring it back here and sell it making very good money. He had two Porsches and an airplane. He was a go getter! I decided to talk to Dr. Lee. “Can I take over your payments?” I asked. With good credit at the bank and a few years in business under my belt, the bank loaned me the money. I gave Dr.Lee a little equity. He sold me the property.

As windsurfing died, we changed our call in “Wind and wave report” to a “Surf Report”. Skateboarding boomed and we held contests. Alec, my inspirational surfing buddy died in a tragic solo plane accident in 1987. I started a surf contest in his name. I wanted the best contest possible. Big trophies, five panel judging, free T-shirts, and great food. The surf community and friends responded with an overflow of help. Some of the surfers attending the first year’s contest in 1989 were Kelly Slater, John Logan, Jim Hogan, and Cory and Shea Lopez to name a few. Alec would have been very proud. 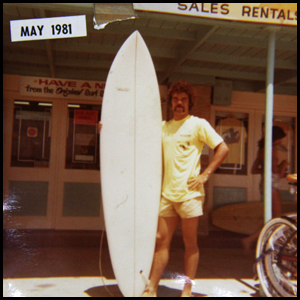 Those that remember the early years of the Surf Station will remember we were a full service Amoco station. (we changed to Texaco and other brands later) After I bought the place, one day I was standing out front watching my help. Two guys on one side helping gas customers, and two guys on the other side helping surf customers. Payroll was high. That’s when it hit me, combine the 2 businesses and three could handle what four were doing now. This would cut my labor by 25% without sacrificing customer service. We did it and it worked. The Surf Station was truly integrated.

A few years later, the big boom in self serve came along. This was great for the Surf Station. One of the biggest problems in any retail business is how to get people in your store. Well, with self service gas they have to come into the store to pay for their gas. However, instead of walking into a convenience store, they walk into a full blown surf shop. We acquired many new customers this way. The gas station / surf shop idea truly worked! As the years have gone by, our customer base grew and grew. We needed to serve them better.The gas had become a distraction from our true purpose. So I did away with it in 1995. Today, the store is at an all time high. We carry more surfboards than ever before. We are very fortunate to carry some of the best surfboards in the world. Channel Islands East Coast Warehouse is here. Our clothing lines are unique and different. Many of our lines you won’t find in other surf shops or malls. The growing demand for our Surf Station signature products is felt as far away as Japan.

Selling surfboards and living surfing is a great lifestyle. But I believe in giving back to the community that supports you. From sponsoring and helping surfers to putting on skate contests to the Alec Maitland Memorial, we give back because it’s the right thing to do and it’s truly enjoyable.I have much to be thankful for. Without Dr. Lee I wouldn’t be here. Without Alec’s inspiration I wouldn’t be here. Without my realtor friend doing the research I may not be here. On top of it all, in the bigger picture, I feel I’m blessed from above.

Now with a new web site for increased communication with you, the reader, The Surf Station looks to the future with increasing optimism and the hope of even better surf tomorrow.

Time has passed, and so here’s another chapter…..

Well, a lot has happened since the above history was written. It feels really weird that I need to write another chapter, but here goes:
Probably the single biggest thing at the Surf Station that happened since 1998 was the growth / improvement of our surf report. More and more people are online nowadays as the world gets connected and we took the free service call-in surf report and put it into an on-line format. How can this simple thing be the biggest thing that has happened to The Surf Station? Well by doing this, it allowed us to connect to our customers so much more, so much better.

The people that love the surf and ocean are our customers and by giving them something they want (information) for free, they appreciate it. And when they appreciate it, they patronize. And the continued increase in our business has allowed us to grow and grow. Confidence in the shop has also increased through outside the surf industry real estate investments, allowing for more capital to be pumped into the Surf Station and consider growing. And we’ve done just that, adding a women’s surf shop (the Girl Next Door) and re-opened The Surf Station at Crescent Beach. Girls and women’s surfing is growing and growing and a shop ‘just for her’ fits a niche in North Florida Surfing.

The Cresent Beach surf shop is a different idea as well, having all used surfboards and discounted surf merchandise. The concept is working well. We expanded on our surfing lessons that we’ve offered over the years adding St. Augustine’s original ‘surf camp’ in 1999. We had a positive impact on the new skate park that has come to town and are behind the people that are bringing a second skate park to come, possibly close to the Surf Station’s original store location.

Personally, my wife and I have had children, 2 little boys, and life couldn’t be better. I have seen the miracle of childbirth, and know God plays such a huge roll in all of our existence.

We are now planning another expansion at The Surf Station by adding a 4th surf shop called “Surfers at Home” to our surf location at 1020 Anastasia Blvd. This store will bring surf home furniture, surf art, surf photography, and home decor, ..all inside its own surf shop. We’ll double or maybe even triple the size of the board room when we expand, scheduled for summer/fall of 2004. With the extra size, customers will have an even better selection of surfboards from local shapers and from surfboards throughout the world.

Sounds like it’s been slow around here! I can’t wait to see what the next 10 years or so brings