(Please note the following disclaimer): This surf forecast is often tweaked a bit- sometimes even radically changing (up or down) based on analysis of the latest forecast model runs that influence potential wave-generating weather systems. Consequently, the 4-7 day portion of the surf forecast should be taken with a grain (or two) of salt…

Thar she blows! A strong cold front will barrel through Florida early Sunday morning, with a freshening northerly flow kicking in behind the front. This scenario will build a moderate/rotating swell to the start of the work week.

Nothing much currently going on in the tropics. The infrared satellite of the tropics shows several non-organized areas of convection scattered about the Atlantic Basin.

Next? The western Caribbean Sea, southern Gulf of Mexico and western Atlantic are the favored regions for late season tropical development until increasingly stronger frontal activity later in October and November scours out the remaining tropical moisture. There is some model hinting that a system may spin up near PR in late October just before Halloween (Trick or Treat?). I’ll continue to monitor model runs and update the surf forecast as systems warrant…. stay tuned.

Here’s a great link to Levi’s Blog which periodically discusses in detail activity in the Atlantic Basin during hurricane season… stay tuned for updates!

Here’s the big picture to monitor for additional tropical systems in the Atlantic basin.

This graph illustrates the 14-day forecast for primary swell height and period for the St. Augustine offshore buoy:

This map illustrates sea height contour (in feet) for the near shore Atlantic Ocean east of Florida:

This surface weather map analyzes weather observations, surface pressure (mb) and fronts in the southeast US:

Sea surface temps in the GOMEX and western Caribbean Sea (favored areas for early season development) continue to climb into the low/mid 80sF.

The NHC Atlantic Tropical Weather Discussion and the tropical western Atlantic satellite loop are good tools to monitor the Atlantic basin for activity.

Here is a link to the impact hurricane activity has on our coast: Florida beaches face sand shortage 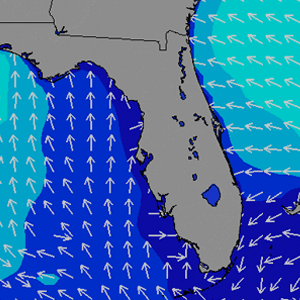