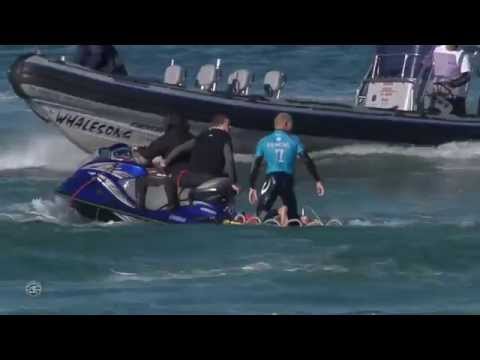 The final heat of the 2015 J-Bay Open between Mick Fanning and Julian Wilson was put on hold just moments after it began when Fanning was attacked by what is suspected to be a great white shark in the lineup. Fanning and Wilson were able to make it to the support boats unharmed, but the event was called off and the prize points and money were split between the two competitors.

Wilson had just completed the opening wave of the final, and Fanning was in the lineup waiting for another set wave when the attack occurred. In the footage, viewers are able to clearly identify a large fin approach Fanning before chaos erupts. Suddenly, the water churns into a fury. “Holy shit!” an event commentator exclaimed as Jet Skis in the lineup raced toward Fanning to pull him from the water.

Miraculously, Fanning came out of the life-threatening event unscathed. Moments after the attack, he gave a chilling description of the harrowing ordeal stating that he “got a punch in” while fighting for his life.

“I’m tripping out right now. I just saw the footage of the attack. I was just waiting for my opportunity in the heat and I knew Julian was down the point. I was just about to start paddling and I had this instinct that something was behind me. And then the shark came up from behind me and attacked. I got pulled under water and was being dragged under by my leg rope. Then it kicked me off and I punched it a couple of times. Then my leg rope broke and I was just swimming. I was yelling at Julian to get away but he was coming towards me to help. What a legend. Then I was just readying myself for it to come at me again so I turned around, hoping I could at least see it coming. And then before I knew it the boat was there and I was safe.”

As Mick mentioned, when the attack unfolded, Julian rushed in to help. Following the ordeal, Julian spoke about what occurred:

“I couldn’t believe what I was watching. I saw the thing pop up behind him,” he said through broken tears. “I saw him wrestling it and saw him get knocked off his board. Then a little wave popped up and I couldn’t see him. I thought he’d gone under…it felt like I couldn’t get there quick enough. I literally thought that I wasn’t gonna get there in time. I thought ‘I’ve got a board. If I can get there in time I’ve got a weapon and I could stab the shark.’ Then he started screaming at me, we both started screaming, and then the boats came in [to help]…it’s all too much really.”

Kieren Perrow, the WSL Commissioner, chimed in with the official word for the day: “Everyone is rattled and shaken up,” he said. “We’ll make a final decision soon. No heats will be held today.”

Perrow later confirmed that no more heats will be run at the event and that Fanning and Wilson will split the first-place points and money.

“We are incredibly grateful that no one was seriously injured today. Mick’s composure and quick acting in the face of a terrifying situation was nothing short of heroic and the rapid response of our Water Safety personnel was commendable – they are truly world class at what they do. The safety of our athletes is a priority for the WSL and, after discussions with both Finalists, we have decided to cancel the remainder of competition at the J-Bay Open. We appreciate the ongoing support we have in South Africa and once again want to express our gratitude to the Water Safety Team.”

Jeffrey’s Bay is a notoriously sharky lineup. And while there have been a number of attacks at the break in the past, an incident like this during an event is unprecedented.