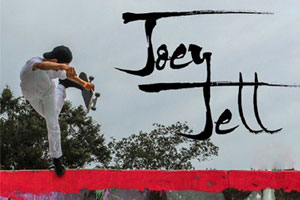 America’s newest pro skater, Joey Jett age 19 who resides in St Augustine, will be premiering his new pro part at Kona skatepark in Jacksonville on Friday, August 4 at 7pm as a dedication to the memory of Jacksonville skater, Kyle Evans who passed in June at age 18. Jett was named a professional skateboarder by legendary skateboarder, Mike Vallely, on Friday to a packed skate park in Baltimore. Vallely surprised Jett with his first pro board at the event where hundred had shown up. Jett’s first action as a pro was to dedicate his part to his friend who was a regular at Kona skatepark.

Jett is unique – he directed, edited and skated in this video. He has made his mark in street skating by video production. He is currently one of the top viewed teenage skaters in the world. Jett, a Baltimore born skateboarder residing now in Florida, got his start in 2006 at the age of six and was considered a phenom by the age of seven when Vallely named him MVP of a huge skating event in Philadelphia. Jett then joined the Dew Tour circuit from 2007 – 2010 as a vert skater before giving up on skateboarding.

At age 15, Jett decided to get back into the skateboard scene, this time taking up street skateboarding and leaning on his artistic passion to help craft his videos. His first street video part was appropriately named “The Comeback,”. Jett’s second video fine-tuned his unique style and it was that video he sent to Vallely wondering if Vallely would remember him from 2007. Vallely remembered Jett and seeing Jett’s talent, Vallely invited him to join Street Plant on their east coast tour. The rest is history!

“We are thrilled to have Joey as a part of the Street Plant team,” said Vallely, Founder of Street Plant. “He brings his unique style and artistic nature to street skateboarding and this new video clearly shows the world why we made him a professional.”

Jett recently returned from a highly successful tour of Japan with Vallely in May. Jett has another premiere at So Cal Skateshop in Mission Viejo, California on August 13. He then leaves again for Europe in September. Also look at www.joeyjett.com for more about Jett’s career.